“SUCCESS” IS NOT THE KEY TO ULTIMATE HAPPINESS, RATHER IT’S A JOURNEY. 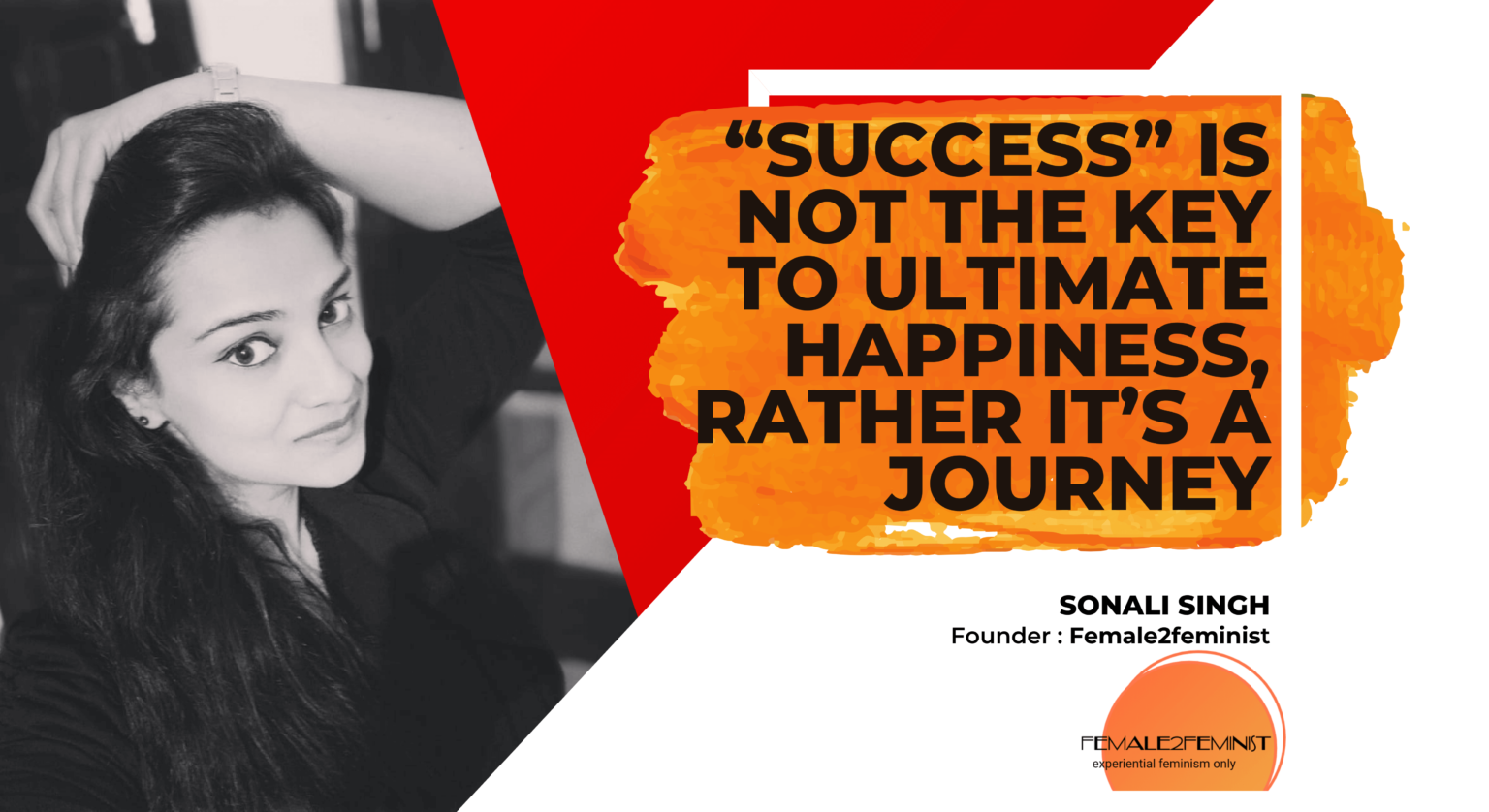 “Success” is not the key to ultimate happiness, rather it’s a journey.

My face-off with life: The beginning: To simply begin with, I belong to a family, where both my parents have been related to medical background or categorically putting, they have been doctors. I’d prefer to keep it a little low key here. A background like this, had already called in for an uninvited scrutiny that accompanied me for my life thereafter and possibly, is still accompanying me, in this moment. So, be it academics in the first place, or personal life, many pairs of eyes would not leave me alone anytime. Those pairs, later transcended to my professional life, making me eerily wary of every passing moment of life. It gave me the feeling of “being watched always”, and got me cautious of my surroundings. And it many a times made me fear even in my own skin. I would curl myself up, inwards. There were many episodes that hit me harder than I could have ever thought. Anyway, I completed schooling from my native place and later my engineering from a bigger city, but my emotional journey always remained a battle to be won.

The struggle-here it goes: My story swivels around my emotional evolvements and making me internally balanced that I am today. The seemingly simple journey of a female, is a transformation of her, from being an introvert in childhood to an ambivert and now someone who is fierce to face the world again, in her crudest form. I was an artless mind and could not anticipate a lot of curt happenings of my life. Happenings that even today, sometimes hover over my mind as strong dark flashbacks.

I had some woeful incidents that almost every female will surely relate to while hitting early adolescence and then early adulthood. Some were deeply scarring psychologically and did leave me numb to a great degree. That too, for long enough that I could not even speak about them to anybody for I did not know, what to say and how to say. This would leave me (a bewildering adolescent trying to figure out the new changes within) with my unvented anger echoing within me. You have got to fight your personal struggles on your own. And then the adolescent girl in me promised herself secretly that she will do anything but keep silent, only to evolve later into a teenage rebel. And would bash and thrash any perverted element on streets or elsewhere now, who even dared to stare. This was extremely relieving and had me have my back patted for myself. Proud and satiating it was, then and now.

Now comes another struggle. Your professional performance is directly proportional to your emotional solace. Once, you feel your solace is ruptured irreparably, your tagged “profession” does not even matter to you, for you are “human” at the end of the day. The coldest part is, you would not have a whiff about it, and it will creep in. Only the resurrection from it afterwards could have helped. No, I do not want to paint this as a sorry story. But yes certainly want to put it out as a story of inception, to give someone in need, some hope. Remember, there is never an end, before THE END.

My emotional havoc that lasted subconsciously, dint go easily. It made me want to quit on all fronts. A life that started off well, with a charm to do very many things-of the bucket list as they say, now felt as an undying mundane process. It all happened owing to a set of varied reasons, and for a long while my world got contracted to only my thoughts. An ugly silence as a repercussion of solitude had started to reside inside of me. A solitude that dint seems to end and existed even being amidst everyone. I felt connected to nobody, not even my surroundings.

It took away all the bright side that once existed, and left me parched inside. After a point, my reasoning had also failed to answer umpteen questions no matter how hard I tried to find answers. Amidst all of this, the loss of my grandma, whom I had always been very close to (and will always be in my heart), worsened the air for me. And how I wanted to quit on small or big things and quit things that I loved once. My work, my performance, my friends, and my hobbies that once brought life into me were now not more than cumbersome. Art and music, which people consider as their haven in blues, now felt annoying to me. All I wanted to do was shut myself up and not see the world. Just nothing. The world outside and inside alike was a dark place.

The failure: What most brutal people would choose to define as “my failure” in terms of monetary accomplishments and would boast about theirs, I would like to call it as my awakening. A beginning that is yet to begin.

I suffered on health fronts dramatically (details of which need another story) and I could see people making me prey to their inhuman mockery and momentary judgments. I fumbled, I faltered, I fell, I failed and I failed mentally. I fell only to get up again. The mockery, the scrutiny, the betrayal, the abandonment, the denial, the non-acceptance, the void within, my estrangement from myself, the competition, the pressure, the jealousy, the emotional yielding to a few people, and a lot, that I could decrypt only later and understood all that has been happening to me until now. All of this coming from strangers was bothersome for a while, but coming from foes in the form of friends, was the most heartbreaking part, and shook me to the core.

Thankfully, nature follows its own way of balancing, the harsh and the kind. There were few good souls in my case (again sometimes known, sometimes unknown) who may not have been present physically. But yes were present significantly enough to give me, the then much-needed mental rinsing. This rinsing became therapeutic for me and cast its results positively. Thanks to them. I do not want to put names, lest it may dilute the beauty of it.
What was left thereafter in me, was a dawned and relieved heart. The strength to love my scars (psychological or physical). I dealt with my health in all positive aspects and corrected many of my pathological levels like that of cholesterol, migraine, high blood pressure, hormonal imbalances, etc. which sadly had hit me in the prime of my youth. Not just this, prior to these, there have also been three specific individual incidents, when I had suffered fractures in my clavicle, left palm, and right foot respectively. These were still easier to deal with, as compared to fighting the internal void.

I am still in the process of taking control of all of them, and keep making myself double sure so I do not collapse into that reverse spiral. I re-imbibed in me, my dormant hobbies. I started to feel them again closely. The art started happening to me all over again, in bits and parts. And made me stronger with each passing day.

What I call my success: Writing in general as a hobby, has always been a part of me that could have almost died, had I not revived it. But writing my heart on my very own online canvas has given me a new sense of insane independence. It made me meet the girl that I had lost somewhere amidst the concrete wilderness. Yes, I met myself again. My fears are gone. The pairs of eyes that followed me or still follow may be, do not bother me anymore. Today, I wear my scars with pride. Situations might get me worried, but still, give me the strength to refabricate myself over and over again. This is my success. I know, many people would still want to believe me and invalidate my journey. But I will not let them to. Not this time. Not ever again. I will not let them have their share of sadistic laughs anymore. This journey from a wrecked soul to a boisterous female is something that I am extremely proud of. And I want to make my online space a voice for myself and for all those who can relate to me.

The new beginning: A journey that felt as if had tumbled towards the end, was actually dusking for a while only for a new dawn. And now will always be alternating between dusks and dawns, until the FINAL DUSK.

My words for you:

“Women, please do not be emotional slaves to anybody. Just anybody. Create a zero-tolerance sphere within yourself and around you, for your pride. Realize who you are. Life shall always find its way of survival if it gets hell-bent to fight. All you have to do is keep breathing.”