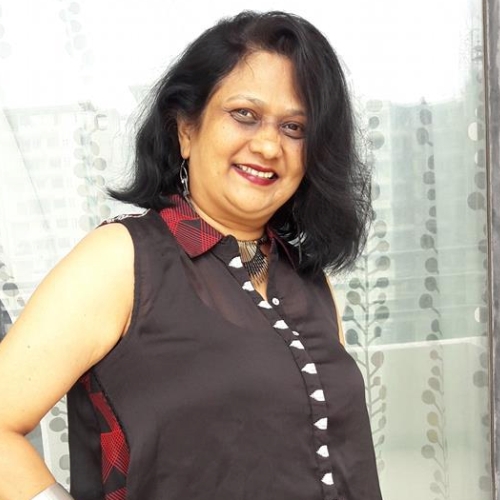 " To lead a full life with vibrant possibilities is like keeping your tender dreams intact. A women’s voice needs to be heard. Her challenges are immense in the mainstream Indian traditional life. Yet I "

Aneeta Chitale as an Author With a zeal for life, a solo traveller around the globe, a word-a-holic and a storyteller, are but a few phrases to describe Aneeta Chitale as an author. After leading a nomadic life for than ten years, she is now residing at Pune, India. She makes her foray in the writing panorama with her debut novel ‘Sojourn To Maldives’. She has been on these exotic islands fringed with turquoise green waters, bioluminious beaches, blue lagoons and virgin beaches. A rear treat for eyes to fest on, which drives one into the magical world of the Indian Ocean. Having travelled extensively, on these archipelagos nation which is a metaphor for life in paradise! Aneeta Chitale as a Poet She is a poet at heart and has made a collection of her Poems. Her anthology will be soon released in 2019. Her poems are deliberate in style and theme. She has experimented with free verse, sonnets, haiku and nature poems. She casts her spell with her intrinsic style and deeper shades. Her Poems have been widely read in Greece and around the world. Her poems have appeared in the various anthologies of the world. Himalayas, Love and Mirror are her master pieces to mention. Aneeta Chitale as a Mentor & Principal I set up schools, do benchmarking. Travelled and worked in a multicultural environment. Writing books & poems are my creative streaks. I work with children having learning difficulties. Cater to senior professionals for learning English Language. Aneeta Chitale has actively been in teaching field for the last 20 years. These have been full of hard work and educative years, she feels. She traversed to Oman, Dubai, United Kingdom and The Republic of Maldives. She has worked as a Principal, Coordinator for English at International level ESL Trainer at some leading Language Institutes in India. Taught to Sophomores’ at Dubai and UK.